All in the Right Time 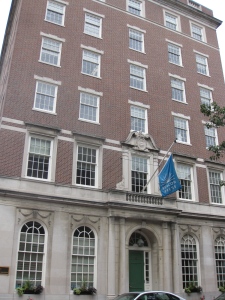 Be-wigged tour guides were talking Revolutionary history to tourists as I exited the steamy subway onto Boston Commons a few weeks ago. I climbed the cobblestoned streets of Beacon Hill, where British troops marched at the beginning of the American Revolution. On the corner of Mt. Vernon street is the brick building that is home to my publisher, Beacon Press.

The ground-level windows featured books by other Beacon authors: Gandhi, Marion Wright Edelman, Eboo Patel and Kate Bornstein’s A Queer and Pleasant Danger: The True Story of a Nice Jewish Boy who Joins the Church of Scientology and Leaves Twelve Years later to become the Lovely Lady She is Today. Good company for The Crooked Mirror!

My editor, the wonderful thoughtful calm Amy Caldwell, welcomed me into her office for our first face to face meeting. I left knowing that my book was in exactly the right hands.

After our talk, I roamed the historic hill in a happy and contemplative frame of mind. I passed Smith Court Residences, a stop on the Underground Railroad and the African Meeting House, one of the oldest surviving African-American church buildings in the U.S. On Philips Street, I walked by The Vilna Shul, a synagogue built by Lithuanian immigrants in 1919. The doors were wide open, even though the brochure said it was closed on Tuesdays.

Inside, a young woman greeted me with genuine warmth and offered to show me around.

The Vilna Shul (now the Boston Center for Jewish Culture) was an immigrants’ house of worship. The pews were borrowed from the nearby black Baptist Church (the crosses are carved out) and there are clam shells on the Holy Ark (it’s New England, who cares if clams aren’t kosher)? she showed me a Torah holder fashioned from a pickle barrel.

But best of all, She showed me the secret of the stained glass windows, simple arched forms with uppermost panes of pink, cobalt blue and orange.

No time pieces were permitted in the synagogue, she explained. The ingenious solution to not knowing when it was time to pray—pure conceptual art— was to position the windows in such a way that at sundown, the diminishing light shifts the orange glass and the pink glass into equivalent color values. The windows are a clock!

All in the right time. 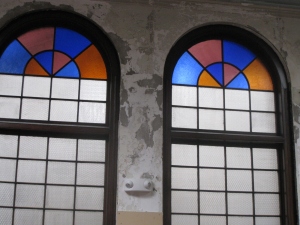 3 responses to “All in the Right Time”

This site uses Akismet to reduce spam. Learn how your comment data is processed.